That post really says nothing.
More Than Ready has been shuttling every single season, to Australia, for like 17 or 18 years in a row now.
Can't see a young stallion needing a rest this early. Curious.
"It's been my policy to view the Internet not as an 'information highway', but as an electronic asylum filled with babbling loonies."
Top

What is interesting is this is the second time I have seen his fertility mentioned. The first was by the vet in Chile in an offhand comment when she mentioned that his fertility was good the second year there which makes me think that it was a bit of an issue the first year. More Than Ready is a great shuttler and his longevity doing so is really the exception more than the rule.
Top

Sigh...I have never understood why there is so much negativity on this forum. Anyway, in Kentucky, Chrome was bred to 145 mares in 2017 and 133 in 2018. He had a full book this year and already has mares booked to him for next year. There are no statistics from Chile. However, Haras Sumaya, where he stood there, also has a farm in Kentucky. They also bred to Chrome in KY. Not exactly a situation where they were disappointed in him.

More to the point, there is this from the TM stallion manager after Chrome's first season: "“He is a dream for a stallion manager and a dream for his owners. He’s everybody’s dream,” Terrazas said of the 6-year-old son of Lucky Pulpit, who has been very fertile and could complete the season with around 90 percent of his mares in foal." https://www.thoroughbredracing.com/arti ... ding-shed/

Why is he staying in Kentucky? Listen to the man, himself, Duncan Taylor. (1) He is a horse who has never had a real break since the age of 2. Short breaks, yes, but never the 8 months off he'll get now. (2) He is a money-maker for TM. He draws huge numbers of visitors on those paid tours. They visit the gift shop, have meals at the TM restaurant, maybe play golf at the TM golf course, etc. People have their weddings at TM. The publicity TM gets from having Chrome there also contributes to their bottom line. All of that more than makes up for whatever percentage of the stud fees TM gets from Chile, and without any of the costs and risks of sending the horse there.
Top

Geez, lets calm down. I get being a big fan of a stallion (considering most of my posts concern a certain War Front), but NOBODY IS ATTACKING HIM. You're not doing anyone any good with your extremely long, extremely defensive posts. The fact of the matter is that we don't know why he isn't shuttling this year. The speculation about why he isn't shuttling has been pretty tame. (For example, War Front's fertility is constantly in question and I never see this as an attack. He's also labeled a lot as "overrated" but I don't immediately go on the attack, because any stud with a fee as high as his probably needs an evaluation as to whether that fee is warranted. I think it is, but YMMV.)

And please, lets not attack Mariasmon. I have been on this board for a really long time now and she is one of the posters with inside knowledge and I'd rather not have her get mad and leave like so many others have done.
Top

I appreciate it, but I'm not sure how much inside knowledge I have. I hear some things and I wouldn't post something I don't know to be true. At least not without the stipulation.
Top

mariasmon wrote: ↑
Wed Jul 03, 2019 1:58 pm
I appreciate it, but I'm not sure how much inside knowledge I have. I hear some things and I wouldn't post something I don't know to be true. At least not without the stipulation.

Thank you for this, and I do apologize if I offended you earlier. My intention was to try to get the point across that speculation and rumor can be harmful. What I have tried to do is post factual information that indicates there is nothing wrong with Chrome's fertility -- not to be defensive or to defend him, but to present the other side. Here is yet another article that goes counter to the "lack of fertility" speculation: https://www.thoroughbredracing.com/arti ... CIeXFLMi7s

The article discusses how much they loved Chrome at Haras Sumaya in Chile. It also contains this statement, "2014 Kentucky Derby winner bred 143 mares during the 2019 season at Taylor Made." That is up from the number he bred last year, hardly the sign of a stallion with fertility problems. Instead, the fact that he bred more mares goes hand-in-glove with Mr. Taylor's statement that Chrome got more mares in foal this year. I hope you see the point I'm trying to make. All of the actual facts point in one direction while the speculation points in the other.
Top

California Chrome Will Not Shuttle to Chile for 2019
https://www.bloodhorse.com/horse-racing ... e-for-2019

1. Chile's economy is not as strong
2. His libido and health is great but he's bred 5 back to back seasons and they want to give him a break
3. Farm in Chile changed management
"I'm here, free as the wind, fountain of extraordinary knowledge, splendidly corrupt, and eager to be of profitable service."
~ Peter Lorre 1904 - 1̶9̶6̶4̶ ∞
Top

mariasmon wrote: ↑
Wed Jul 03, 2019 1:58 pm
I appreciate it, but I'm not sure how much inside knowledge I have. I hear some things and I wouldn't post something I don't know to be true. At least not without the stipulation.

Okay, maybe inside knowledge is a leeeetle bit of a stretch, but still. You're still more knowledgeable about the industry than the average joe.
Top

Here is another article about Chrome in Chile:

Do owners of top tier stallions exert any influence behind the scenes over which of a horse's first crop go in the gate first, or where they might be placed?

Katewerk wrote: ↑
Wed Jul 03, 2019 10:07 pm
Do owners of top tier stallions exert any influence behind the scenes over which of a horse's first crop go in the gate first, or where they might be placed?

Strategically you'd think they'd want the crop to be front loaded with likely winners to make a good "first impression".

I think Coolmore manages to orchestrate some of that, but it's so heavily dependent upon the horses themselves that it can only be controlled up to a point.
Top


"The economy in Chile is not as strong as it was during those first two years, there has been a management change at the farm, and the horse has just bred five seasons back to back,"

California Chrome bred 145 mares his first season and has 98 live foals (68%) in his first crop, who are yearlings of 2019. During his first season in Chile, he reportedly bred 110 mares. Back in the U.S. for 2018, he bred 133 mares and, according to Taylor Made, bred 143 mares this year while achieving his highest in-foal percentage so far.

https://www.bloodhorse.com/horse-racing ... KjBygnHGcY
"It's been my policy to view the Internet not as an 'information highway', but as an electronic asylum filled with babbling loonies."
Top

Hat Ninja (Hat Trick), an Argentine-bred MG2W, has been retired to stand at Haras Chenaut in Buenos Aires. It is the same farm as Easing Along, Orpen, etc. Dam Stormy Nimble is a Guineas winner down south.
"I'm here, free as the wind, fountain of extraordinary knowledge, splendidly corrupt, and eager to be of profitable service."
~ Peter Lorre 1904 - 1̶9̶6̶4̶ ∞
Top

via @Goldship_001 on twitter - Gold Ship (JPN) on parade yesterday, obvs feeling his oats (as usual) 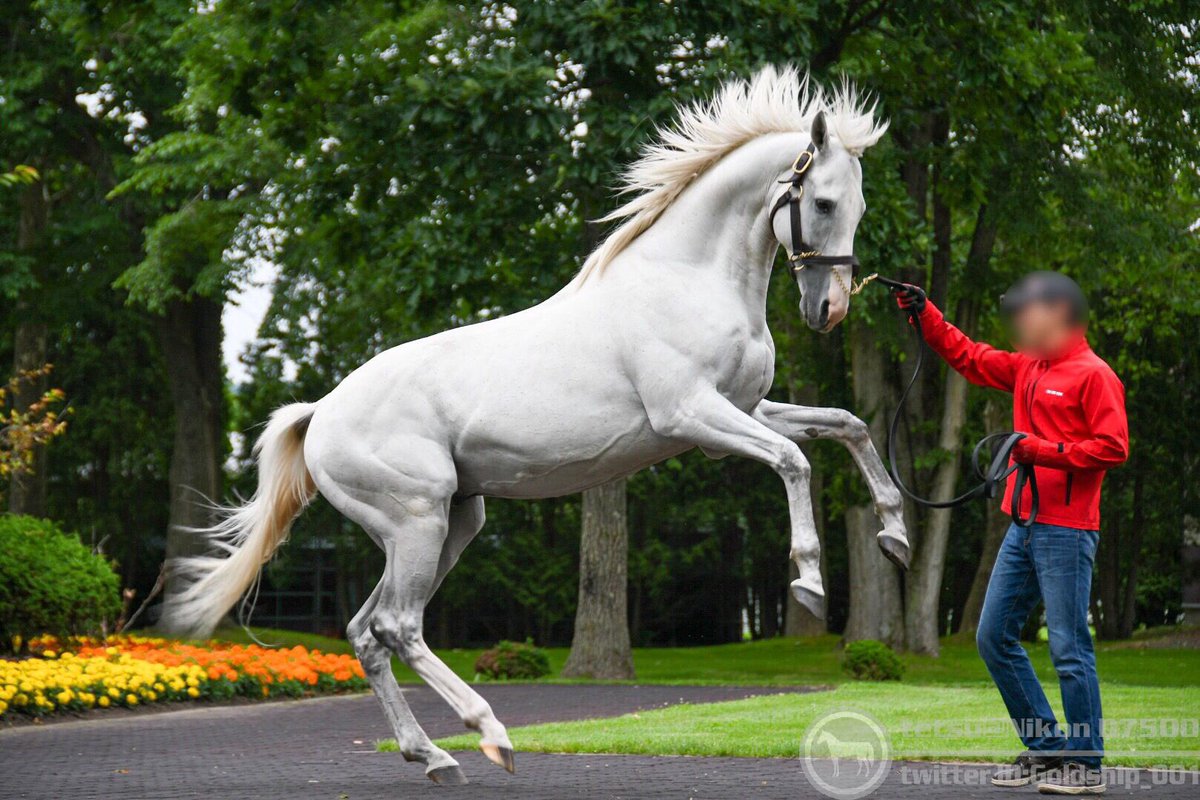 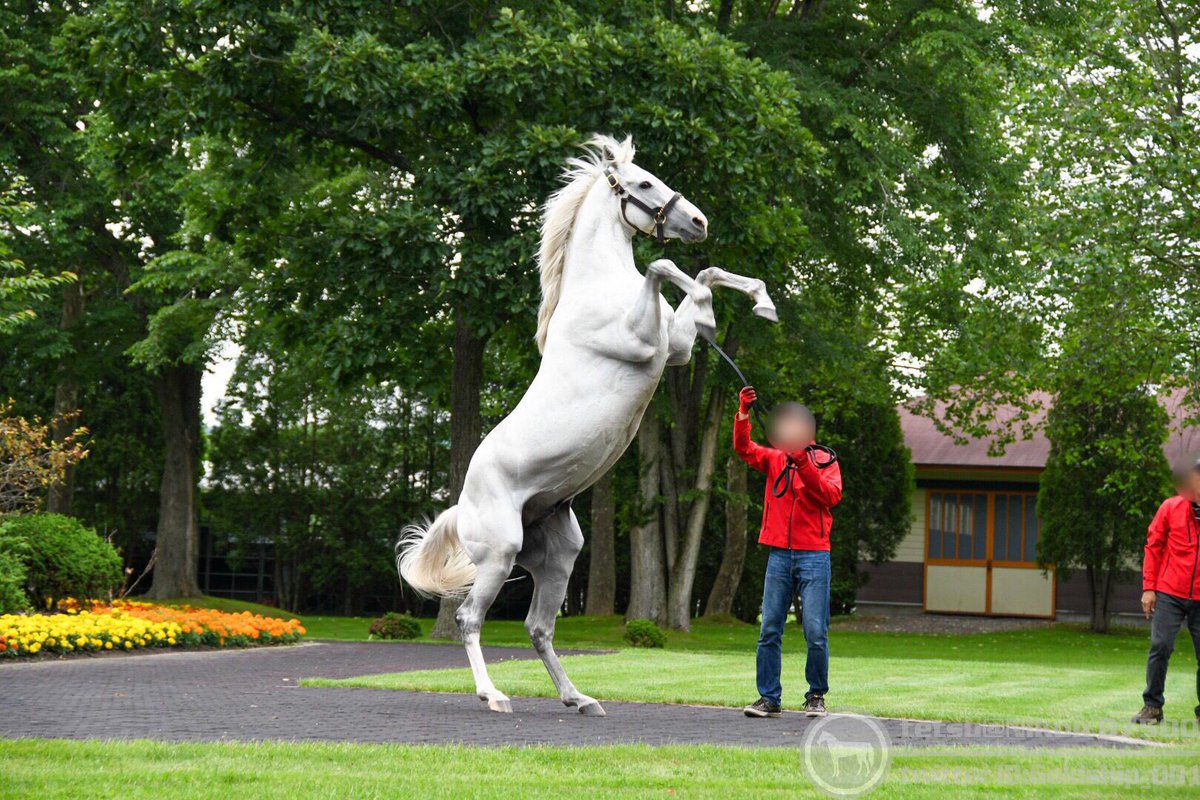 I wonder if the stallion barn crew draws straws to see who has to handle him during those stallion parades.

I dunno but it surprised me a little to see (at least I think so, even though it's blurred) the handler is only wearing a baseball cap... usually they've had helmets since he's so unpredictable with his feet. So maybe that *is* a bit of mellowing...?

via Kate Hunter on twitter, King Kamehameha (JPN), champion son of Kingmambo and influential Japanese sire, has been pensioned from stud duties at Shadai.

While it's not entirely unexpected, and he is 19 years old, it's still a big loss for Japan.

At least there's Lord Kanaloa (and hopefully Rey de Oro, one day) to carry on his line in an impressive way.

He's a bit younger but I wonder how long Deep Impact will remain active, especially if his neck issues persist.
"I'm here, free as the wind, fountain of extraordinary knowledge, splendidly corrupt, and eager to be of profitable service."
~ Peter Lorre 1904 - 1̶9̶6̶4̶ ∞
Top
Post Reply
5151 posts