I think Justify would rather watch summer movies with us like Deadpool 2, eat grass, and help create fertilizer with his sh!t than run a 6th time in less than four months.

Justify better get the summer vacation he deserves after June 9th whether he wins the Triple Crown or not. Don't do what Seattle Slew's owners did.

^ Gave us that same look once we whipped out our smartphones before the Santa Anita Derby. I stood about 25 ft away from him. His ears pricked up and just posed.

My loyalty will never go away whether he wins the Triple Crown or not. Made me money three straight times. Will always be grateful to this beautiful racehorse... 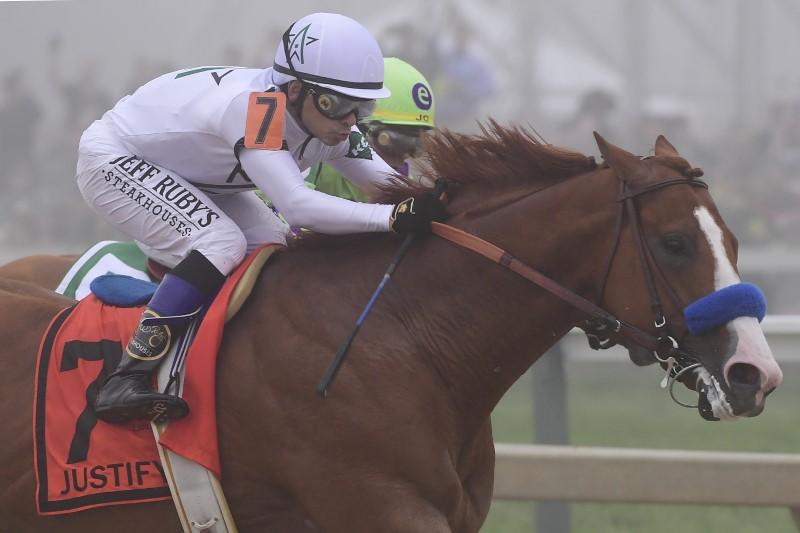 One thing is for certain, whether you're a new fan to racing or you're a hardboot that's been around for fifty years, you have never in your lifetime seen a horse accomplish what Justify has, period.

You may not like it, maybe you lost a bet or you don't like white hair, whatever, the fact is the fact.

Who is your favorite horse that started out their career going 5for5?
I've found it easier to tear up tickets at 8/1 instead of 8/5.
Top

And all the others! Ruffian, Slew, Man o War... that last one especially was a chump.
Top

And all the others! Ruffian, Slew, Man o War... that last one especially was a chump.

I DIDN'T SAY JUSTIFY WAS THE ONLY HORSE TO START THEIR CAREERS GOING 5/5. I asked who was your favorite?

Although he is the only one in our lifetimes to win Triple Crown races without having the foundation of running at 2 as BB did.
I've found it easier to tear up tickets at 8/1 instead of 8/5.
Top

And all the others! Ruffian, Slew, Man o War... that last one especially was a chump.

Haha oh yeah, totally! I actually just treated myself to a copy of The Great Ones, from 1970 (highly recommended if you can find it cheap), and it's such a historical treasure trove. They listed the horses alphabetically because they didn't want any of the Man o War, Sysonby, Colin, or Citation fans getting upset. Amazing how some of those names have persisted while others are nearly forgotten.

I won't deny that what Justify has accomplished is amazing, but I'm not sure how much a single turf race in September counts as "foundation" and it always bums me out when Big Brown gets overlooked in these discussions. He was amazing.
Top

Tessablue wrote: I won't deny that what Justify has accomplished is amazing, but......

I apologize in advance as I know there is no political talk allowed here, nor do I know your political leanings, but this is a comparison that's undeniable as this is exactly how never-trumpers across the nation sound, it doesn't matter what he accomplishes, the next word to come out of their lips and fingers is BUT.

Now back to our regular programming.
I've found it easier to tear up tickets at 8/1 instead of 8/5.
Top

BigTen, you posted a couple of long quotes on the previous page that seem to be from other sources, but you didn't provide a link or any credit for the sources. It's not polite, IMHO, to post stuff and ignore the original writers.

Could you please post links with future quotations?
I'm also curious about the two photos you posted above on this page. Did you take those photos? If not, could you please credit the photographers?
Thank you.
Top

The four chestnut horses in Charismatic, Funny Cide, Smarty Jones, and California Chrome all lost the Belmont because they all ran out of gas and lost to fresher horses who didn't participate in the Kentucky Derby or Preakness.

That's my real feelings with Justify heading to Belmont. His performance has been regressing after his Santa Anita Derby win similar to California Chrome.

Hope Justify proves us wrong and saves his best for last. Even if Audible isn't in the race, the fact that Bravazo nearly caught him late is a cause for concern.
Rock Hard Ten. Free House. Soul Of The Matter. Lit de Justice. Zenyatta. Justify. Cigar. Ghostzapper. Lava Man. Silver Charm.
Top

I don't understand why some people ignore 'Chrome's mangled foot when explaining why he didn't win the 2014 Belmont.

If he comes off the pace and loses, people will say it was the wrong decision...
Every TC winner has done so winning their Belmont on the front end, regardless of their previous run styles. I don't know why you'd change a successful formula now, especially with a horse like Justify who likes being in front or near it, and generally does well there. If it ain't broke...
I decided to do a comparison list of previous failed TC attempts to see how many actually tried to go to the lead like TC winners all have, if any, and failed.
Turns out not many looked at that angle.

Anyway obviously race position isn't the sole thing that is gonna get a TC contender beat, there's multiple factors but I do find it interesting that since 1970 there have been 4 Triple Crown winners, and like the 8 others before them, they all won running their Belmont on the lead. Meanwhile, there have been 13 failed attempts, and only two of those were failures after running on the lead. Might be a little different going back in the 60s and beyond but I'll have a look another time unless someone else wants to.

* I didn't count I'll Have Another for the purposes of this list since he scratched before the race.

ETA: Big Brown's and Justify's accomplishments at this point in their respective careers are very similar. You can argue that Big Brown having one race at 2 wasn't going up against history, and you can argue maybe he had a slight advantage in terms of the fact he actually got an experience (any at all) to mature off of mentally, where Justify had to get his first experience and the mental impact of that in a slightly shorter time span. But physically, a 6 month layoff after only 1 race at 2 isn't that much more different than starting at 3.
Last edited by Treve on Sun May 20, 2018 2:42 pm, edited 2 times in total.
A filly named Ruffian...

Tessablue wrote: I won't deny that what Justify has accomplished is amazing, but......

I apologize in advance as I know there is no political talk allowed here, nor do I know your political leanings, but this is a comparison that's undeniable as this is exactly how never-trumpers across the nation sound, it doesn't matter what he accomplishes, the next word to come out of their lips and fingers is BUT.

Now back to our regular programming.

justify gets beat in the Belmont if the jocks on the other horses remember Touch Gold's Belmont - don't let justify see you coming - don't engage him in a dogfight down the stretch - and you have a shot at beating him.
Top

Interesting stuff, Treve. I would like to add that, like 'Chrome, Big Brown got stepped on right out of the gate, leaving a rear shoe bent away from the hoof. IMHO, that compromised his race, making him uncomfortable and angry.
Also, Charismatic was badly injured in his Belmont, never racing again.
Top

Thanks Baroque, I'll add it in, I couldn't remember if they had found a discernible physical issue, I just remembered Kent saying he felt off, and scared for the horse, eased him.
A filly named Ruffian...

We don't care what @EJXD2 says. The Champ is back!
Top

My take on the Belmont regarding Justify... either he runs lights out, or, he gives way long before the wire. On a side note, I seem to keep hearing about how much Justify has done in the last X-number of days/the last three months or so, but when compared to the pre-TC schedule of Spectacular Bid which included three, count 'em three 9f races leading-up to the Derby, Justify's schedule looks like "child's play". And if I'm not mistaken, Affirmed had a couple of 9f races pre-TC.
Top

It's all in perspective/relation to the era as well.
Both Affirmed and Spectacular Bid had enough physical foundation and racing experience even before going into their 3yo campaigns.
Horses also didn't run on Lasix back then.

But there's no doubt the Bid and Affirmed were tough as nails even for their day.
A filly named Ruffian...

No matter what happens in the Belmont Stakes, I will never get off the Justify bandwagon. Six weeks from California to Kentucky to Maryland of pure fun. Thanks for the great memories, Justify.