I am glad he won but he looked tired winning and barely held off Bravazo. He has had 2 very hard races in the past 2 weeks.I hope he is ok but worry about going to the well one too many times in the Belmont against fresh, rested horses. I want to see him race this fall. At the very least, give him the summer off after the Belmont- let him go to the spa at WinStar and enjoy some therapeutics and pasture time. Hope his heel is ok.
Top

Squeaky wrote:I am glad he won but he looked tired winning and barely held off Bravazo. He has had 2 very hard races in the past 2 weeks.I hope he is ok but worry about going to the well one too many times in the Belmont against fresh, rested horses. I want to see him race this fall. At the very least, give him the summer off after the Belmont- let him go to the spa at WinStar and enjoy some therapeutics and pasture time. Hope his heel is ok.

I feel like going to the spa at WinStar when he is a Scat Daddy who won the Kentucky Derby is basically saying 'retired' lol. I don't have much faith in WinStar keeping Justify around racing very long.
Top

It sounds like he got his breath back, recovering quickly enough to have a bounce in his step on his way to his barn. But he'll need more than his coltish 'bounce' to prevail in a 12-furlong test over Big Sandy, so I hope Bob is right about that quick recovery time.

ETA: You may not be wrong about an early retirement for Justify, CQ. Maybe if we hadn't lost Scat Daddy...and he hadn't turned out to be the stellar stallion with FOUR Derby starters...his stakes-winning sons wouldn't be rushed off to the shed.
Last edited by BaroqueAgain1 on Sun May 20, 2018 12:14 am, edited 2 times in total.
Top 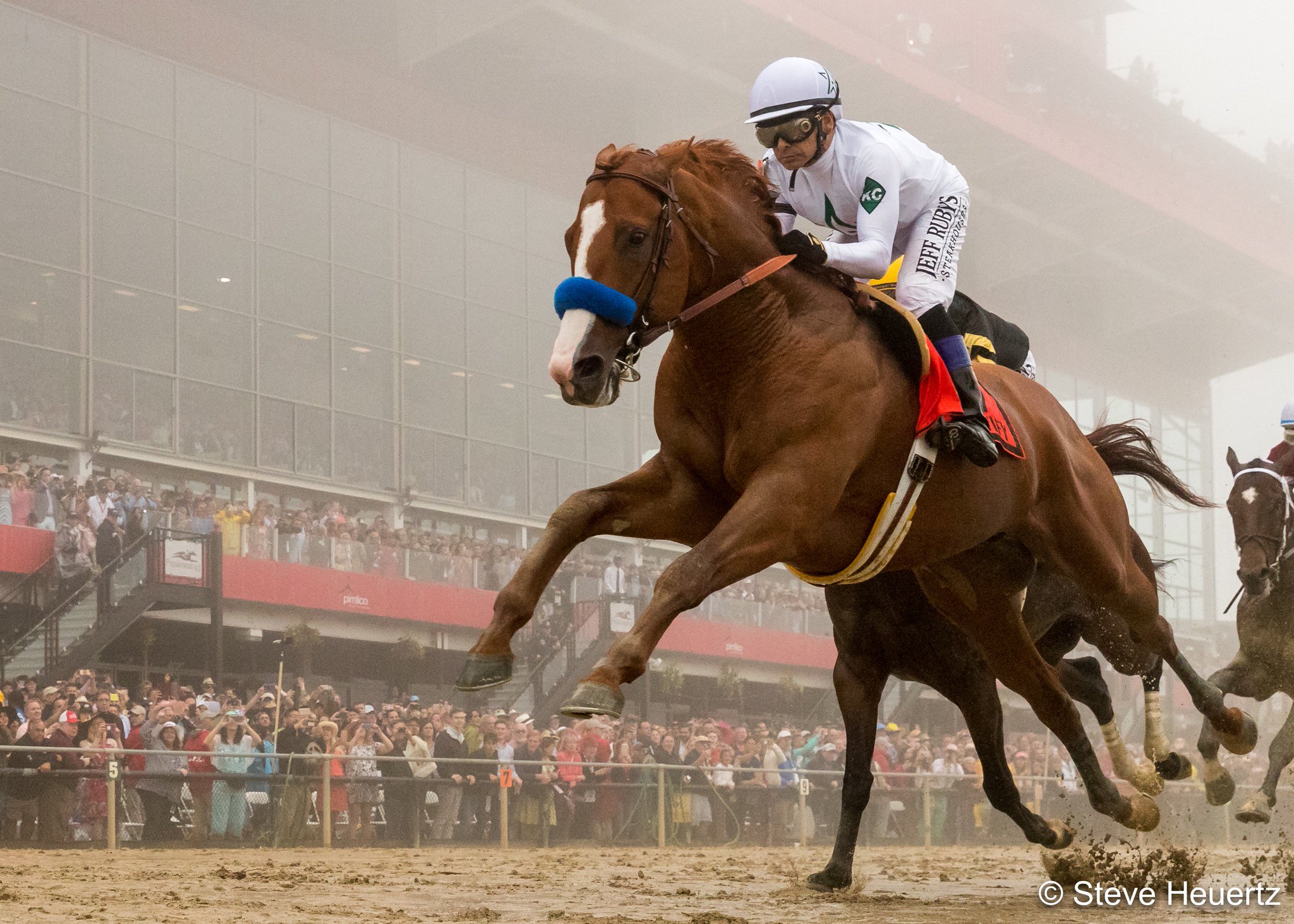 Wow.
Justify and Smith look so in sync there, both straining for the wire. I don't think Mike touched him with the whip in the last 100 yards or so; just a strong hand ride on a horse he knew was already running his heart out.
Top

I don't see a regressing horse. I just see a tired one. His career began in February. That's his 5th race in three months. Justify is already running on fumes. He needs REST.

Audible will win the Belmont. Don't be shocked if Justify doesn't hit the board. It's all good if he doesn't win the TC. Opens up a potential 4YO campaign if he remains sound.

It took four attempts until Baffert won the TC. It took three for Espinoza. This is Smith's first attempt and he could be on a tired horse who needs the entire summer off.

Somnambulist wrote:You were both encouraged by that finish?

I'm not sure who is saying their opinion is fact. Its merely speculation. A lot of us here and in general have experience in and around horses.

It's this level of haha all the questioners are so wrong that make it difficult to want this horse to do well. It's racing. This sport is not kind to fairy tales.


I have to agree.

It’s not crazy to think a horse with no foundation to lean back on is gassed and out of run. It’s not like he won going away, I imagine Smith and Baffert are thankful that stretch wasn’t any longer.
Top

Bob Baffert is the King of the Preakness. Now a perfect 5 for 5 with his Derby winners. But his Belmont record is shaky. Pletcher has more wins and might extend that lead on him with Audible.

I really, really would love to be wrong and Justify wins out. I am also just trying NOT to get my hopes up. I just don't see he has enough gas left in the tank to win his 6th race in less than 4 months while going 12F for it. I wouldn't take Justify at 3-1 odds if that was the case no matter how much I would love him to win.

Get Audible at 5-1 and collect your cash. Then I hope Justify gets his revenge on Audible back at Churchill Downs for the Breeders' Cup Classic.

This is how I see Justify finish the Belmont...

Justify looks kinda like California Chrome. He might finish the same place as CC in the Belmont. It's not fair like Coburn stated four years ago but it is what it is. It's not mandatory for the Kentucky Derby losers to run in the Preakness.

This Triple Crown attempt is unfamiliar to Mike Smith. He could study that 2015 Belmont all day long. If he lets Justify run his race, he might burn out quickly like Smarty Jones did. He might try to fight the horse to slow him down which will also use up gas. Damn if you do, damn if you don't.

and on twitter i read someone say "that's how you beat him, look him in the eye! they have his weakness figured out!"

horses get tired after racing lots in a teeny time frame. shock. gasp. how? who knew? (still say this was the case for ap's loss to keen ice, not frosted "exposing his weakness")
justify may have looked like he was fine and not tired immediately after the race, but we'll see how he looks/feels tomorrow, and over the next few days. i'm gonna bet he's way more tired than we think he is, regardless of the ppl saying "nuh uh look he was prancing!"

however, if he is just swell, a winstar scat daddy TC winning colt would probably end his gallop-out into a horse van and be at winstar the following morning, lol. should he win, i imagine he won't be one that just passes thru their revolving door like many of their stallions seem to.

edit; big ten, did you really include the 99 belmont? any horse with fractured sesamoids would be overtaken. (i'm pretty sure it was concluded he was injured before he hit the wire, welcome to corrections if not). same for chrome, not sure where he'd have been had he not been stepped on, but it looked pretty bad and i recall someone saying he was leaving bloody hoofprints.
Top

Justify was a tired puppy at the finish but the closers were swamping Good Magic too. As an old school fan (and just old), I think 3 weeks and we could see a horse ready to go. A stout horse like Hofburg would appeal, though.
I ran marathons. I saw the Taj Mahal by Moonlight. I drove Highway 1 in a convertible. I petted Zenyatta.
Top

Justify will win the Triple Crown. That's it. That's all I have to say.
Top

For some reason I can’t quote directly

BaroqueAgain1-That photo is the first time around, Justify is jumping some tracks in that photo just like in the photo Barbara Livingston captured.
Top

Nicole Russo
‏@DRFRusso
13m13 minutes ago
Justify headed for the van that'll take him to the airport. Back to Churchill to train for the #BelmontStakes 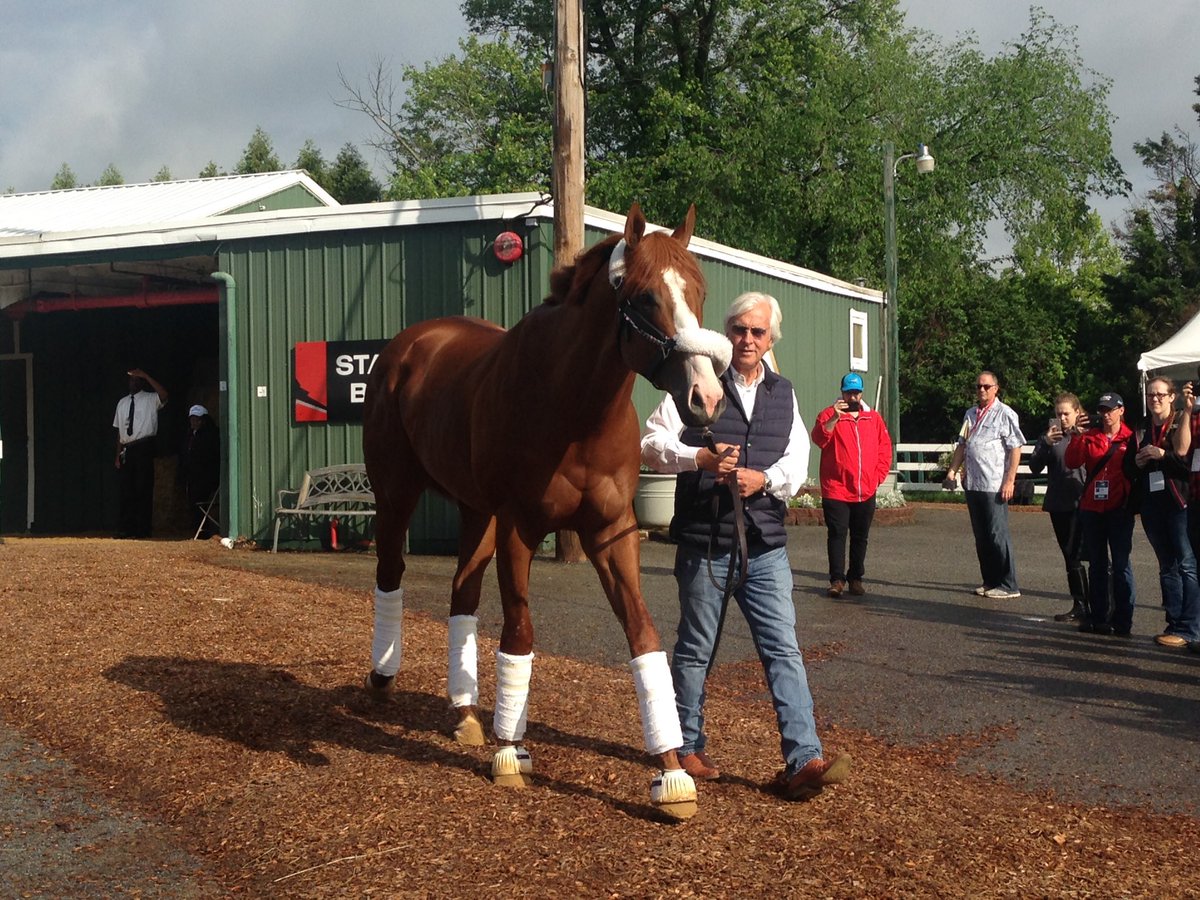 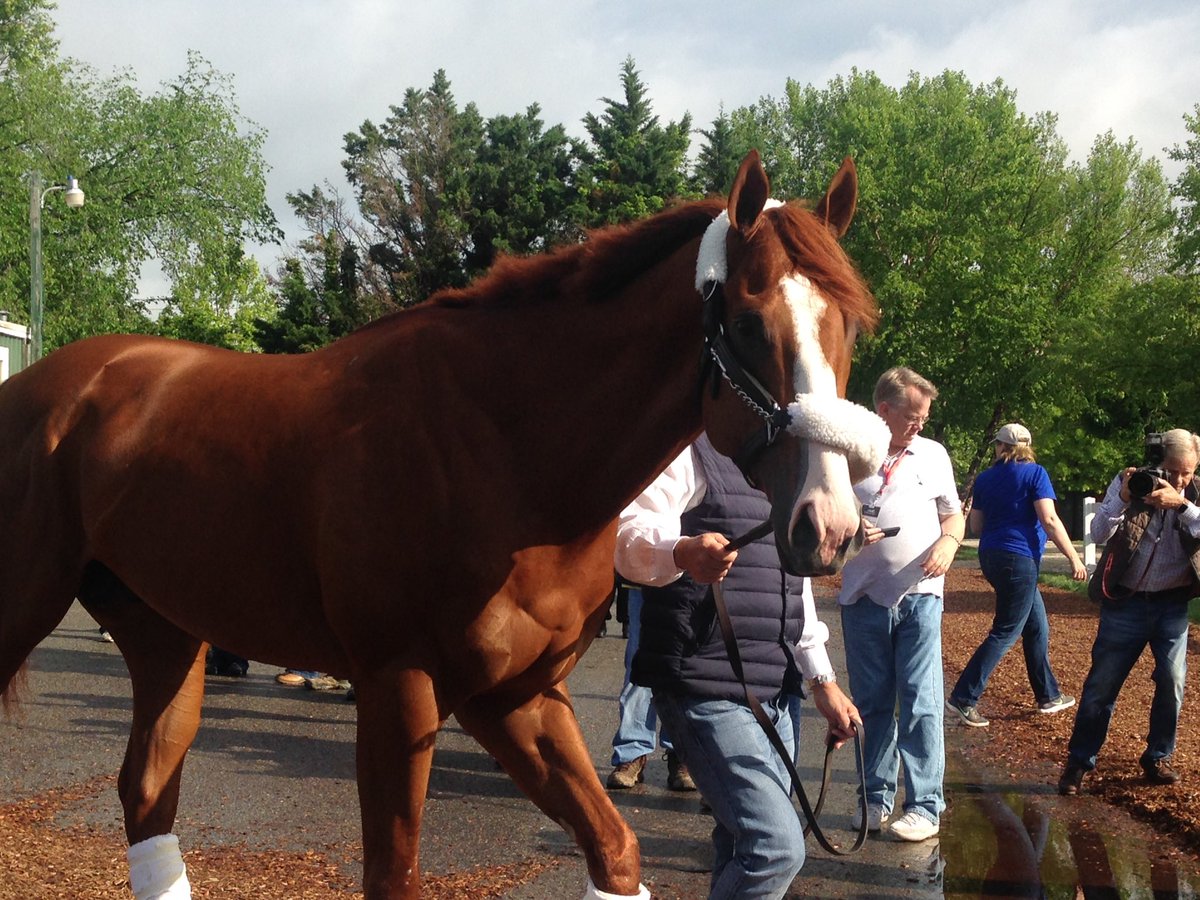 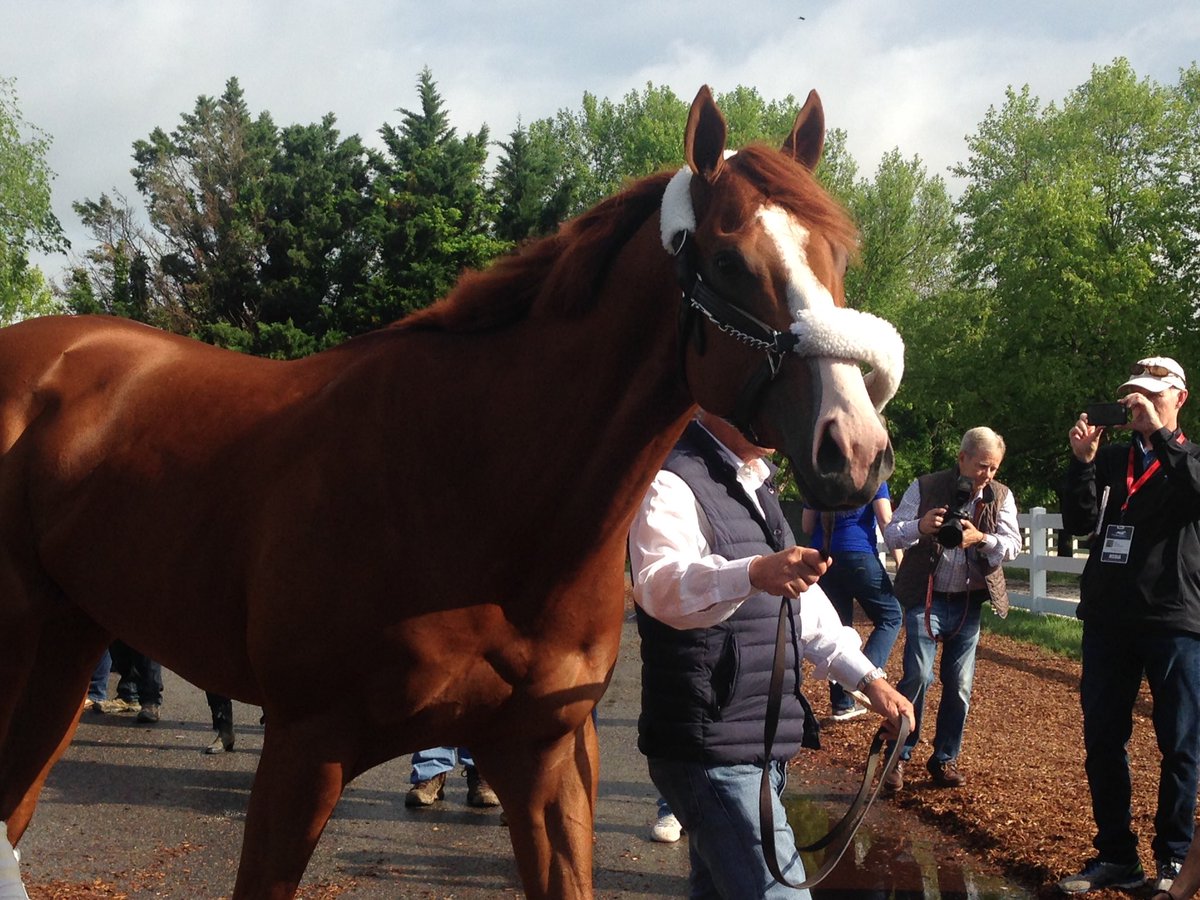 Wish he had gotten some grazing time...
Top

so justify's 'numbers' are going down with each race since the SA Derby. is this true? this knucklehead friend of my husband's keeps saying this. but I don't pay attention to the numbers thing. this guy bases all of his wagers on them. I don't get it. I know justify didn't win by a lot yesterday. I just go by what I see. you guys who understand the numbers probably know what this guys means though. I have no clue.

in any case, the horse looks great the day after. I am sure he will be ready to go for the Belmont.
Top

Ballerina wrote:Justify will win the Triple Crown. That's it. That's all I have to say.


I wish I could be that confident. I’m hoping he can do it but I’m worried that a horse that skipped the Preakness is going to come up and catch him near the finish as with Smarty Jones.
Government is not the solution to the problem. Government is the problem. Ronald Reagan.
Top

Bob seems to really have a special relationship with Justify. He always looks so proud of him. Like a father proud of his son. His love and admiration for this horse really shines through.
Top

oh yeah sure he always loves and admires his really big horses. --- I feel bad for the ones he calls 'old nags' though.... and tells people to get them out of his barn. ask Billy Koch of Little Red Feather racing about that.
Top
Post Reply
1132 posts