Thread revival.
Once upon a time there was a horse named Kelso.
But only once. ~Joe Hirsch
Top

Richard Mandella said this morning that Setsuko is back at the track galloping, had been recovering from a suspensory injury. When asked what his plans were for him, he said that they were doing the Seabiscuit thing and want to eventually win the Big Cap with him

Bluestone Thoroughbreds' Black Diamond Cat (Wildcat Heir) captured his third stakes on the season with an authoritative 5 3/4-length decision in Saturday's $100,000 Montbrook, a one-mile test for Florida-breds at Gulfstream Park. Guided by Jilver Chamafi, the six-year-old gelding completed the trip over a fast track in 1:37 1/5. Trained by Larry Bates, Black Diamond Cat had previously taken June 8 Ponche H. at Calder and the August 3 Housebuster S. at Gulfstream at odds of 13-1 and 19-1, respectively. Only 5-2 to take the Montbrook, the bay elevated his career record to 49-9-11-5, $462,454.
Top

According to Doug O'Neill's FB page, Private Zone will go next in the Vosburgh. Leaves for NY on Monday. In his first return to the track after the Dubai debacle, he won the Pirate's Bounty at Del Mar earlier this month.
Top

Assuming he comes out of his final work in good order, Caracortado will make his return to racing in the Eddie D on 9/30.

LOL! Homeboy Kris was a naughty boy today. He really didn't want Froggyville to pass him. 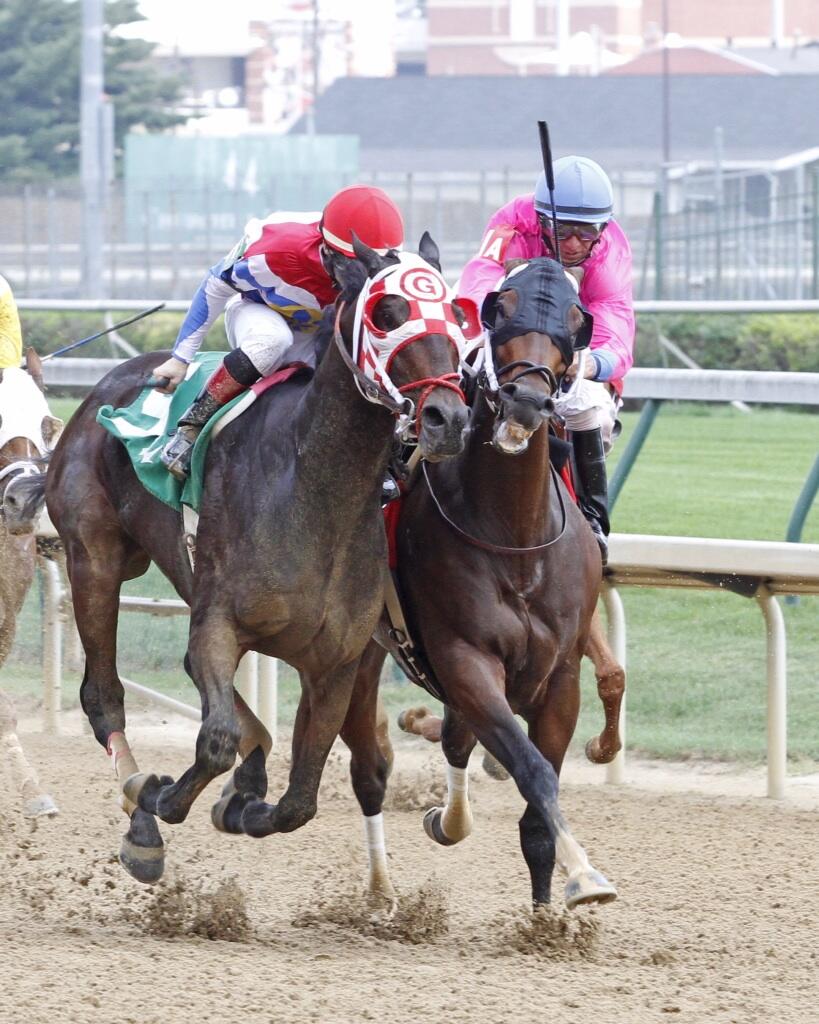 
And then he changed his mind.

Congrats to the 8 year old Immortal Eyes, one of my very favorite geldings, on his win in the Frank J. De Francis Memorial Dash today. He won in a hand ride by almost 7 lengths.

BlindLucky wrote:Congrats to the 8 year old Immortal Eyes, one of my very favorite geldings, on his win in the Frank J. De Francis Memorial Dash today. He won in a hand ride by almost 7 lengths.

I still can't believe he was 9-1. He's better than he's ever been.
Top

* Looking at that photo of Homeboy Kris, it appears that he has an X nose band criss-crossing over his nose, which pretty much keeps a horse's mouth shut. All he could really do was bare his teeth at Froggy (who, I notice, wears the same sort of nose band). Which he certainly did...with bad intent.
* Still, Froggy could not have known that he was safe, and felt like he was about to get bitten.

Jay Privman ‏@DRFPrivman 1h
Successful Dan likely done for year. No BC, nor, it seems, Fayette. LoPresti said today he's tired, may get rest of year off. #breederscup
Top

9yo millionaire gelding Ravalo won an A/OC at Belmont today, his 18th lifetime victory.
http://www.equibase.com/static/chart/pd ... 13USA7.pdf
http://www.nyra.com/belmont/videos/race ... 925/7/pan/
The odds-on favorite in the race, Eastwood, was a Pletcher 3yo with two lifetime starts. I hope he was taking notes.
Top